So, I sprained my ankle Friday afternoon. Frankly this event rendered continuing to prepare to move and to move boxes-o-stuff problematic. To our rescue on Sat am came a bevy of marvelous community members (Bev, Violet, Heidi, Good Don, Scott, Lorenzo, Lynette [I don't think I have left anyone out, but frankly it was a blur of activity so if I did, please forgive me]) who swept in, ignored the mess, and carted over a bunch of boxes and assorted stuff over to our new house and UP the stairs.

I am / we are very blessed, indeed, to be part of such a community.
Susan C.
Posted by Fresno Cohousing at 12:37 PM 1 comment:

Moving is not fun

We haven't moved for 20 years. Now, we are sorting, giving away and packing "stuff" so we can move to our new La Querencia home. We called and Disabled American Vets came with a big truck and picked up boxes and boxes full of our former stuff a week or more ago. Very liberating. And we do hope others come across that stuff (books, clothes, knick knacks) at the thrift stores and find it useful, or beautiful, or funny, or thought provoking. We bought a lot of it, especially books, at thrift stores and used bookstores, over the years ourselves. Now we are trying to do as our friend Bev wisely says, take only what we love. Easier heard than done. However, we are looking forward to a less cluttered, more full life. Dichotomy? Not at all. Less clutter of stuff, more full of living.
Posted by Susan at 7:32 PM No comments:

We've finally got a sunny day again, and we need it. Although things continue to go well in our cohousing community for the most part, we've had 3 recent incidents of sadness. Dexter, Barbara's dog, escaped from his back yard and was run over by a car in the rush hour traffic on the street going by the community. Dexter was one of the dogs that George and I would walk every morning (along with 4 others)--and we miss him.

The second incident was the loss of our beloved cat, Nina, whom we had to have put down because of kidney failure. She had lost about a 1/3 of her body weight and could no longer groom herself. She was still purring, though, and sleeping on our bed at night, but the vet said she was too far gone to try to keep. Nina would have been 15 years old in January. She was named after Nina Totenberg (and we named Nina's sister from the same litter Cokie, after Cokie Roberts).

The third incident occurred just yesterday, when Neil and George were doing some work on the laundry. George was cutting a board with his saw and asked Neil to help him stabilize it. As Neil walked around George (who was on his knees) to get to the other side of the saw, he tripped over George's feet, fell and couldn't get up. In less than 4 minutes, there were about 6 cohousing residents at Neil's side, with blankets, pillows and any other aid that could be useful, as we all waited for the ambulance to come. Neil's hip was broken, and he'll have his surgery on Wednesday. The hospital peeps have finally found a pain killer that works for him (morphine didn't), so he's dopey but more comfortable. Bev is a rock and doing well--but you can be a rock just so long! I'm glad we can be here for here--and Neil.
Posted by Pat at 10:59 AM No comments:

I have never slept so well as I do now in our new house--and that's been every night! The cats are missing the fireplace, I think, but now they spend more time on the bed with us at night. We couldn't find Nina last night when we went to bed. She's a creature of habit, but last night she broke her mold and disappeared to places unknown. She has seldom ventured outside for more than 30 seconds, so I had no doubt that she was still in the house--but I looked everwhere--and no Nina. George turned over in bed around 5:00 a.m., and there she was, in her usual place next to me on the bed, in her usual sleep--totally unconcerned that she had added another gray hair to my head!
Posted by Pat at 11:08 AM No comments:

Posted by Fresno Cohousing at 1:23 PM No comments: 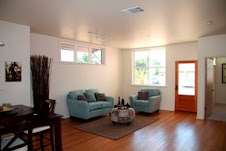